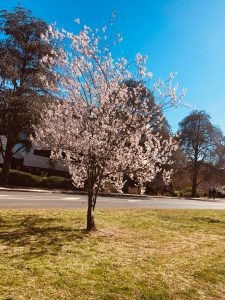 Being the newcomer in the field of climate modelling, I got a chance to attend the fourth annual COSIMA workshop, which was held in ANU, Canberra from 3-4 September. As it was my first visit to ANU and Canberra, I was so excited beforehand. For me, the spotlight of enthusiasm was to meet all people in person whom I was just seen through multiple small screens during all MOM meetings. Parallel to my thrill, I was worried about the cold weather of Canberra, which I thought going to be harsh but in contradictory, it was so pleasant with great sunshine which makes my three days journey in Canberra the best so far.

COSIMA is a Consortium for Ocean-Sea Ice Modelling in Australia, which is supported by Australian researchers from number of different university nodes like ANU, UNSW, UTAS and by public-funded research centres like CSIRO, Bureau of Meteorology, Australian Antarctic Division with strong assistance from NCI (National Computational Infrastructure) and ARC (Australian Research Council). The main aims for heading the workshop was:

In total, there were 42 participants and 20 presentations followed by deep question-answering sessions. Presentation slides are available from the workshop report.

The first session was started by Andrew, which was mainly focusing on the updates of COSIMA and ACCESS-OM2-01 model, 10th-degree resolution for next-generation climate models, new 10th-degree run with 1990-91 RYF (Repeat year forcing) for 50 years, the issues dealing with the crash of the model and on technical progress with COSIMA. In general, his talk was about where we stand at this stage as a COSIMA community, which was very useful to know for the beginners like me. The session was continued by Simon, which he concluded by making a critical remark “new climate models forecast a warming surge”. Further, Hakase explained his results on biogeochemistry simulation with ACCESS-OM2 and plans for OMIP-BGC (Ocean model inter-comparison project) and IAMIP. Then Ben from NCI addressed the next HP challenges for Climate and weather, how flexible are the models ready for HPC system? Ben’s talks point out challenges like how to deal with data? why it’s important to regular updates on the data? He mentioned that the requirement trend of NCI is going up with more data sets which in Ben’s view, making NCI’s life crazy, totally relatable Ben.

The second session of the first day, was mostly focusing on recent scientific advances in the community, which included talks like Response of Antarctic ocean circulation to increased glacial meltwater (in ACCESS-OM2-01), Understanding the Southern Ocean heat uptake and redistribution in theoretical framework and model perturbation experiments, Lagrangian pathways and residence time of Circumpolar Deep Water on the Antarctic continental shelf in a 1/10 degree ocean-sea ice model, High-latitude Southern Ocean response to surface forcing changes under 2xCO2. The first-day session ends with talks on OFAM3, need for the new experiments, its developments and multi-scale data assimilation in Bluelink Reanalysis.

After great talks, the day ended with a pleasant dinner, funny discussions, good bondings with new people. For me the best part of that evening rather than a splendid mulled wine was, I got a chance to know some researchers who are working in the same field, on a professional and friendly level. 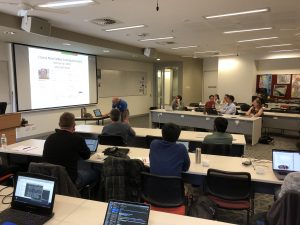 The second day of the workshop started with sessions which are targeting on research done on Ocean heat contents, its projection, its variability and uncertainty in the estimation of global and regional ocean heat content. The second half session was intensive on sea ice dynamics in theACCESS-OM2 suite, Impacts of winter cyclones on sea ice dynamics and Gulf Stream separation in ACCESS-OM2. 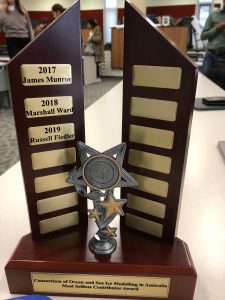 The spotlight of the second day was a session held by Paul, that is the award ceremony and closing out the workshop. I was totally unaware of a pretty cool ceremony. From 2017, since COSIMA community started their annual workshop, they are presenting this award to recognise the hardcore personalities who worked passionately for the development of COSIMA  community, cookbook and have active participation in resolving issues which researchers getting while handling the models. In 2017, the award was given to James Munroe who is contributing to Cosima-cookbook and Cosima-recipe. In 2018, it was passed to Marshall Ward who is now in GFDL, Princeton but still gives his precious contributions to the Community. This year COSIMA most selfless contributor award was honoured to Russell Fiedler from CSIRO for his unconditional support to the COSIMA-Community, the best part of the afternoon was his speech, which tells about his sense of humour. I have never met Russell or other awardees in person but I am looking forward to meeting them in future. It was remarked in the ceremony that if you wi 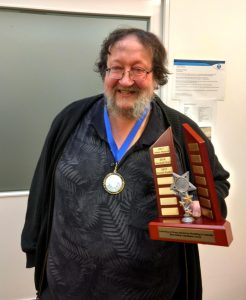 ll get the award next year, it is mandatory not to be present there as, since 2017, all awards presented virtually to the nominees [NB: this was a joke!]. I hope, next year I can see the trophy with the award holder. All in my hope. Anyways, I like the idea of felicitating the contributors in the community so that it motivates new researchers to work in that direction, not in a way to get that trophy but in a way to make their path through some contribution in the community.

One of the focal points of the closing session was how to improve Cosima-cookbook and recipe,  and how to increase the users for the cookbook. As a new user to the python language,  the Cosima-cookbook and recipe examples were very helpful for me. With the help, I can able to make basic scripts in the jupyter notebook. The cookbook examples were onto my expectations and make my life easy in analysing and visualising the basic plots. I would like to recommend this to other researchers in the field who want to write their scripts in the jupyter notebook and want to do the same kind of analysis.

The workshop was closed by discussing and summarizing some important aspects of COSIMA:

In the end, I have enjoyed all the sessions, discussions with people in the field. I have met collaborators, we went through group talk about some new ideas about the project, that motivates me a lot. Especially, I am delighted becoming the new member of the COSIMA community. I have amazed by seeing how the collaborations, deep suggestions work,  to make a better research community. I am enthusiastic to attend more such events in future and looking forward to paving my way in the community.