The third meeting of the Consortium for Ocean Sea Ice Modelling in Australia (COSIMA) was held in Canberra on 7-8 May 2018. This annual COSIMA workshop aims to:

The 2018 workshop is our largest workshop yet, with 30 talks and 49 participants.

The workshop was structured to focus on scientific questions on Day 1, particularly in the first two sessions. In these sessions, topics ranged from from Antarctic shelf processes to oceanic convection, from reversibility of the Earth system to frictional drag. The final session on day 1 focussed more on technical issues, including assessment of the optimisation status of existing models. On Day 2, talks focussed more on strategic issues, including an outline of Bluelink, ACCESS, CAFE and coastal programs. These strategic talks transitioned to small-group discussions (see synthesis below). The workshop finished with a tutorial on the COSIMA Cookbook framework for model analysis.

The Australian landscape in ocean-sea ice research involves a number of interleaving programs, each of which was represented at this workshop.  The figure below outlines the linkages between these programs: 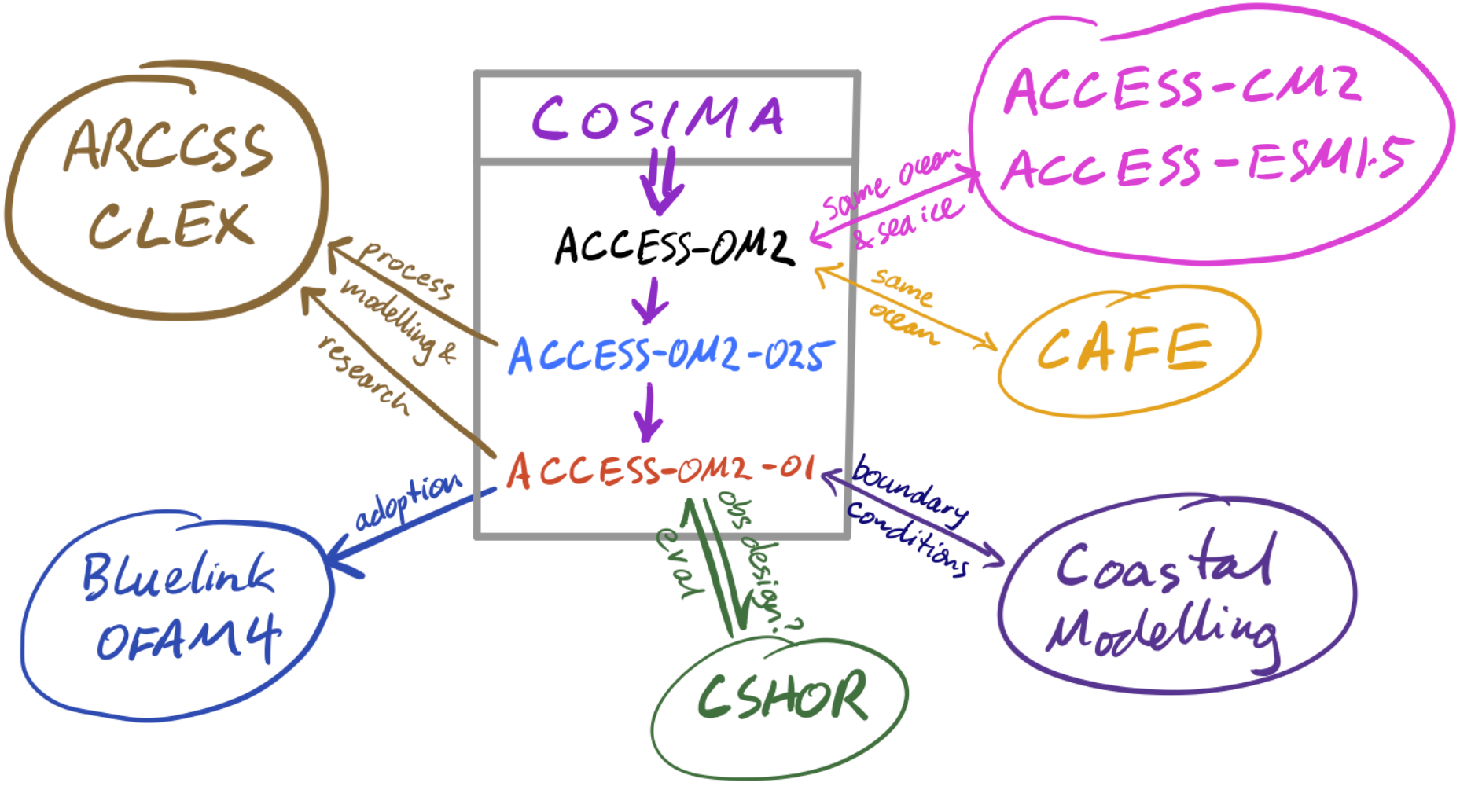 By way of explanation:

CAFE is the decadal prediction system in development, which uses MOM5.

Bluelink/OFAM is the ocean forecasting and reanalysis system which will adopt ACCESS-OM2-01 in future versions.

CSHOR is the Centre for Southern Hemisphere Oceanographic Research; it focuses on observational studies but we hope to establish two-way interactions with this program.

A major theme of the workshop was to review the status of the ACCESS-OM2 model which is the focus of COSIMA. In short, we have had success with model releases at 1° and 0.25° resolution – these models are now actively being used for scientific runs, and are available for download and use by the community. They include a recent upgrade to the file-based atmosphere (YATM) and new JRA55-do forcing datasets. The 0.1° version of the model has progressed significantly in the last year; there are outstanding tasks to evaluate model output and further optimise the model configuration.

The COSIMA Cookbook tutorial was attended by about a third of participants, and some progress was made. The aim of this tutorial was to entrain more active users to the system and encourage input from those users. The Cookbook is similar in style to the analysis system being developed for CAFE and it may be possible to merge elements of each framework at some stage in the future.

Where available, talk files are linked from the presenter’s name.

Tuesday afternoon included discussions of present and future needs and directions of the COSIMA community, via breakout sessions on the topics Sea Ice, Coastal / Forecasting, Coupled Modelling, Process Modelling, Biogeochemistry, and Technical. The overall threads of  these discussions are summarised here.

Transparency, accessibility and reproducibility of model code development, run configurations and output data were named as priorities by many groups. Nic Hannah’s proposed REDB (Reproducible Experiment Database, http://redb.io) was widely supported as a means to tie together and curate the source code, configurations, output and analysis of model experiments. Using consistent shared codebases was also a priority. Containerisation was suggested as a method to make experiments self-contained. Extension of the database to include idealised experiments was also suggested.

There is a need for more model evaluation against observations. Several groups highlighted the importance of better integration of observations for model validation and a desire for this functionality to be better supported in the COSIMA Cookbook. Comparison of CICE to SIS-1 at 1 and 1/4 deg was also suggested.

Suggestions included a glossary for beginners, an online portal for control runs, and to minimise difficulty of running new model configurations. Standardised output files and naming conventions would facilitate analysis. Improved functionality and versatility of the COSIMA Cookbook was also suggested.

It was pointed out that the payu run management software underpins model runs, yet formal funding for its continued development is presently lacking.

Suggestions included a streamlined process for providing community feedback and deciding on priorities, and for community involvement in developing the BGC component. It was also suggested to foster engagement with atmosphere and sea ice specialists, and have a more formalized ice group. The technical team is also seeking more input from scientists, especially regarding sea ice.

Regarding modelling strategy, it was suggested to have intelligent model diversity (not too many versions), a consensus on standard perturbation experiments, and to decide on resources to commit to MOM5 vs. MOM6.

The following list of tasks was identified as a priority for the near term. Volunteers to lead or assist with tasks much appreciated.